A Son Recalls a Trip to Portugal with His Late Father

In 1990, I flew to Portugal with my father, Warner Henry, to visit port producers on the Douro River. As was customary for him, he had brought a number of books about Portuguese wine, including the chapter on Portugal from The World Atlas of Wine, which he considered to be his bible.

Our first night in Porto was to be spent at a famous old restaurant in the city center, and my father was excited to explore the wines of this little-known corner of the wine world. He had been talking all day about trying to find an old vintage Moscatel de Setúbal, a lightly fortified sweet muscat dessert wine that apparently had a tremendous ability to age with grace.

At dinner we waded through numerous wines from the list with the help of a friendly, tuxedoed sommelier, in a stone building in old-world Portugal. At the end of the meal, my father posed the question that we had all been waiting for: “Do you have any Moscatel de Setúbal?” The man’s eyebrows raised noticeably and he paused before replying, seeming shocked that a foreigner should ask.

He presented a bottle with a label so old it was barely legible. By holding it up to candlelight, we could discern that the vintage year was 1902. The waiter poured us each a glass, and the wine, once white, had aged to the color of coffee. 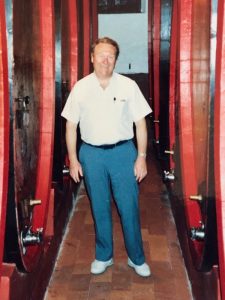 There are very few things in life that take this much age to come to greatness. Strange how so many of those things exist in the world of wine. No matter the nature of the flame, at some point in its life it grows to its most luminous before the light begins to fade, eventually to nothing. The metaphor can be applied to a great Burgundy or Bordeaux, for example, or even the age of a vineyard.

How similar this can be to the life of a great man, whom my father certainly was. He passed away on August 1 of this year, and with his passing the wine business lost a great leader. He was larger than life, and his dedication to the winemakers that are true to their craft was legendary. He was a spokesperson for the little guy in a world that evermore favors the large and corporate. Warner Henry is the main reason why a winery like Lumen exists.

As the grapes came into the winery this harvest, I could feel my father looking over my shoulder at every punch down. I ran through all of the great memories we had together exploring the world of wine, and was brought back to that moment when we tasted the Moscatel de Setúbal together. Years later my father told me that it was the most exquisite beverage he had ever put in his mouth.

I thought about the finale of that first trip to Portugal. We visited some of the best port houses in the world, and were served ports that went back almost a century. But one wine was still on the back of our minds. We returned to Porto at the end of the trip, and had a reservation at the very same restaurant where we had dined night one. When I was showering before dinner, my father came into my room and yelled through the bathroom door that he had left me a taste of wine on my bedside table. I got dressed and then took a sip of the wine. “Holy crap,” I thought, “what is this wine?”  It was hands down better than any wine I had tasted on the entire trip up the Douro River.

I walked to my father’s room to ask what he had left for me to taste. He had a twinkle in his eye. “It’s the Mostcatel,” he said proudly. “I slipped down the street to that restaurant to grab us both a glass.”

I came to realize years later that moments like these were the most transcendent in my father’s life. He best remembered the times when he discovered greatness in unexpected places. I had always hoped he would have one of those moments with a bottle of Lumen. Then one year it happened, after he tasted our 2015 Presqu’ile Vineyard Pinot Noir.

I will never forget the night he first tried that wine — my phone started blowing up with expletives over text. He told me that it was the second-best Pinot Noir he had ever tasted from California. (My father was not prone to exaggeration, and I realized that second-best was the greatest compliment he could have ever paid me. I already knew that first-best was the 1976 Sanford & Benedict.)

In 2018 he helped me purchase an 11-acre parcel next door to Presqu’ile Vineyard. Here, at this site, we will put Warner’s name on a bottle of wine for the first time ever, by naming it the Warner Henry Vineyard. Perhaps it may someday reach the caliber of that legendary Moscatel de Setúbal.